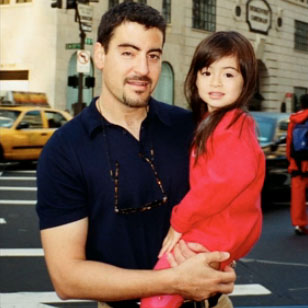 Click the play button on the video to listen to the heart-warming story of a family tradition that has helped to strengthen the bond between this father and daughter over many years.

I’m a big fan of TED talks (some of the talks are just genius) and in this talk by Steven Addis he explains how his wife took a photo of him and his daughter on the corner of 57th and 5th in New York when they were visiting one year.

By coincidence they happened to be in New York on the same day the following year and so took a photograph of the two of them on the same spot.

So at the time he recorded this video Steven and his daughter had visited New Year every year for her birthday for 15 years! Each time they’d have their photograph taken standing where they had each year before.

His wife wasn’t always on the trip so Mr Addis would approach random strangers and ask them to take their photo. He says, “No-one’s ever refused and luckily no-one’s ever run off with our camera!”

The 15 Most Treasured Photographs of His Life

Like many of us who are interested in photography, we rarely stand in front of the camera. As photographers we like to be behind the lens – being in control! I know many photographers who just hate having their photo taken.

As the tradition extended throughout the years Mr Addis has 15 photographs that chart how he and his daughter have changed from year to year (I love the fact that even in the one where she’s aged 15 she has still jumped up off the ground to be held by her father).

The photos, he says, have become ‘sacred’ to them. A family tradition, treasured memories and a record of history.

How Photography Can Change Your Life

So from a basic level, this tradition changed their lives but it when further than that. His daughter started looking for college places in New York. It’s implicit that this decision was influenced by the regular trips there every year since she was young. If she gets to go to college there this simple act of taking a photograph in the same place every year will have had a significant effect on her life.

When Will It End?

I have had similar traditions in my life. There was a period of many years where I would travel to meet someone special to me for the same event each year. Eventually there came a time when we were unable to be together on that day and the tradition died. To this day I still regret that. Let’s hope this father and daughter are able to keep this tradition going for a few more years.

Do you have any traditions you keep alive? Why not write them below…?