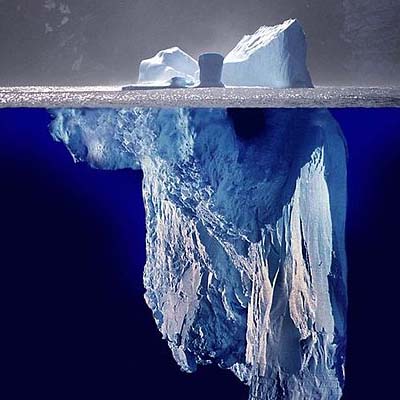 Icebergs are beautiful, stunning and powerful. Camille Seaman has taken some amazing photographs of icebergs and, in this video, shows us some of them and talks about her work.

After you’ve watched the video, scroll down the page to the links to other amazing iceberg photographs.

In the video Camille Seaman describes how she photographs icebergs in Greenland. She describes some of these icebergs as ‘young’ – those are the ones that are only a few thousand years old! Others are hundreds of thousands of years old.

On her website she has a large collection of her iceberg photography. Some are 200ft high.

Icebergs are huge blocks of ice that form in a number of ways. They can start their lives as snow falling on the ground which compacts and forms part of a glacier. Glaciers are ‘rivers of ice’, gradually flowing towards the sea. Those parts of the glacier closest to the sea will eventually break off and may float away as icebergs.

Icebergs can also form as smaller lumps of ice breaking off a larger iceberg. They can also break off a large ice shelf such as those found at the Antarctic.

Just as an ice cube floats in a drink, so icebergs float in the sea. This is because water ice is unusual among substances in that it is less dense in its solid form than it is as a liquid. Sea water contains salt and is even more dense than fresh water; causing icebergs to float higher in the sea than they would in fresh water.

Most of the icebergs we see in photographs are bright white. The sunlight falling on the icebergs is reflected back towards the viewer, or the camera, in the same proportions that it fell. Our eyes see this mixture of all the colors of the rainbow as white light.

There are certain, rare forms of blue iceberg that appear colored to our eyes to the refraction of the light falling upon it. Refraction is a physical process that is essential to the way camera lenses work.

Links to other iceberg photography resources: