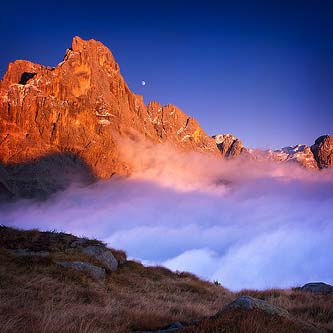 When you focus on a person or object with your camera some of the distance in front and behind will appear ‘sharp’ and ‘in focus’. Depending on a number of things, other areas may appear blurred and ‘soft’. This effect is what people mean when they talk about depth of field in photography.

Photographers need to learn how to control depth of field so that they can, when they choose to, draw the viewer’s eye to a specific place within their image.

Take a look at this stunning photograph by Flickr user rachel_thecat. Notice how the rock in the foreground are in focus (also known as ‘sharp’) and mountain ridge and the moon are sharp as well. That an overall Depth of Field of very approximately 240,000 miles!

Now compare that to this image where only a few feet is in focus and the rest of the image is blurred:

Notice how your eye is drawn to the rocks in the foreground and, although you look to the distance, you soon return to focus your attention on the rocks.

What is Depth of Field in Photography?

In almost any photograph there is an area that is sharp and in focus. In many images this will be the entire photo but often a photographer chooses to draw the viewer’s attention to a brief snippet of the picture. Depth of field in photography depends on a number of factors including the camera and lens that you are using, the distance that you are focusing on, the aperture (or f-number) in use and the size of the print. Professional and amateur photographers alike use this technique to give contrast and complexity to their shot. The physical transition between fuzzy and clear is not instant but quite gradual and gentle, mimicking human perception of physical space.

Given that there is no discrete point between a clear and non-clear point in a photograph, there is a great amount of wiggle room to create a shot with creative use of depth of field. A camera can deliberately obfuscate and blur a shot in order to appear fuzzy over a wide variety of angles.

How can a photographer gain greater depth of field?

The taking distance is one of two major factors that will influence the depth of field. The closer you get to your subject, the shallower the depth of field will be. Go farther out, and you will notice a far greater contrast between the clear subject and the blurry backgrounds and foregrounds. Another factor is the lens aperture that is used as the photograph is taken. If the distance is kept the same, an increase in aperture vs depth of field will give less contrast between crisp and blurry. With many lenses an f/8.0 aperture setting, for instance, will have a background that is slightly blurry, while an f/3.0 aperture will leave the image so blurry that a viewer is unable to pick out details, color contrasts, or letters and words. It should be noted that the focal length has very little effect on the depth of field in photography. While the greater focal length will increase the scale of the background relative to the foreground, it can cause the background to look out of focus. This, however, does not affect clarity of the field of focus.

Like much of photography, mathematics plays a key role in determining the optimal depth of field. The camera type, the aperture, the focal length, and the distance to the subject matter will all play a role in the closest and farthest range that you can shoot to gain quality and clarity. Sometimes these ranges can be quite large, the span of an entire mile, like the course of a river for a scenic photo. Other times they may be the span of a few inches, taking a shot of silverware on a table.

How can you get the better or greater depth of field on your shot? The easiest path may be just to use the smallest possible aperture (remember that a smaller aperture will have a larger number) to create the best depth of field. This can be problematic since small apertures create the need for very long shutter speeds. If you do not have a steady mount for your camera, the vibrations of your hand can affect a small aperture shot. This confusion made by movement can not only jeopardize the clarity of a shot but also give very poor resolution.