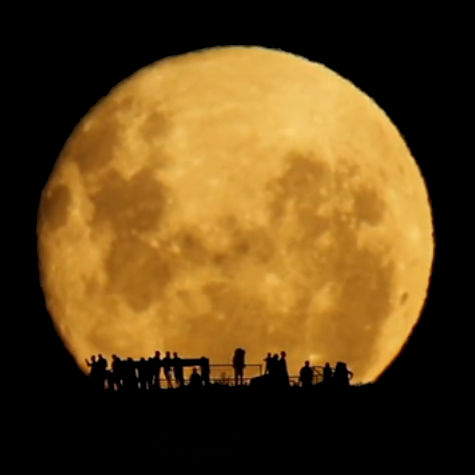 Take a look at this short video by photographer Mark Gee. It’s one of the most beautiful YouTube videos I’ve seen in a long time and I wanted to share it with you.

So How Come the Moon Is So Big?

You may have watched that video and been astounded by how big the moon was. Your first guess may have been that it was done with some sort of special effect or video editing software. Well Mark says on his website that it was created 100% in camera and I believe him.

If you take a look at Mark Gee’s website (link below), he describes how he took this full moon silhouette. He says he was about one and a third miles away and he used a lens with an effective focal length of over 1000 mm.

Using a long lens, far away from two or more subjects, the perspective is flattened. This is a well known effect. By using a long lens the relative sizes of subjects that are far way from each other is distorted. The effect is used often in movies where the camera is moved back on the dolly (the tripod on wheels that is mounted on a track and can be moved) at precisely the same time as the zoom lens on the camera is adjusted. The camera is moved back at exactly the right rate to make the framing of the subject consistent so you see the perspective flattening effect in real time. Take a look at this video for an example of this:

How You Can Use Flattened Perspective in Your Photography

By moving further away from your subject and using a long focal length lens (but not the digital zoom feature of your camera) you will make objects that are far away from each other appear to be closer together.

You can use this effect when you have something in the background that is too small and you want it to appear to be bigger. You’ll need to use a small aperture if you want both objects to be sharp and you may need both objects to be a good distance away from your camera.

You can read a more technical explanation on Wikipedia.

As photographers we probably stumble across a lot of pictures by chance. For me this is true of Mark Gee’s work — a facebook Like flashed up on my screen, I clicked it and was hooked! The next 15 minutes went by quickly as I watched several YouTube videos and Googled his website to discover more of his stunning work. I stared at the final image on this page for minutes – we just don’t get skies like this where I come from.

Check out these links to Mark Gee’s website and YouTube channel (they open in a new tab/window).

The page on his website where he describes what he did to produce this video.