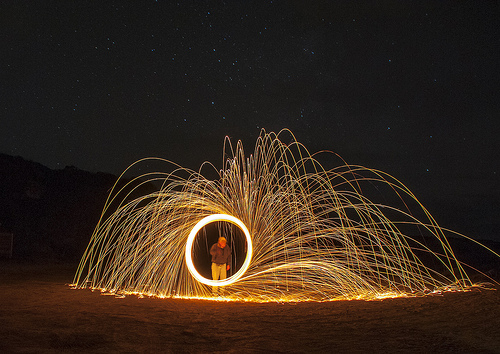 Shooting in low light is an opportunity to be creative. Check out these tips for overcoming the technical problems and create something beautiful tonight.

In the ‘good old days’ of film photography the only way you could up the sensitivity of your film was to develop the entire roll of film (between 10 and 36 shots, depending on the type of film and camera) using a special procedure that affected every shot on the roll.

With today’s digital cameras you have the luxury of being able to ‘uprate’ your ISO on a per shot basis. All you do is look through your camera user guide and find out how to change the ISO setting. It’ll normally be set to something like 100 ISO or 200 ISO. The higher the number the more sensitive your camera will be to light.

Advantages: It’s simple to do. You just change the ISO setting on your camera.

Disadvantages: You’ll probably get more ‘noise’ on the shot. The term ‘noise’ describes the speckles of odd colors that tend to appear in shots taken at high ISO. With film cameras we used to see a very similar effect, but for different reasons, and it was called ‘grain’. Although good quality, modern digital cameras are much better at low light photography than older models, it’s still there.

That said, noise adds atmosphere and is sometimes deliberately added to shots for this reason. Professional photo-editing software, such as Adobe Photoshop, has noise reduction filters that can reduce this for you.

Open Up the Aperture

Beginners: The lens of your camera has a mechanism for adjusting the amount of light that enters the main body of the camera. This is called the ‘aperture’. The dial that controls the aperture is on the barrel of an SLR camera’s lens. It’s marked in units known as f-stops. On a typical lens you’ll see numbers such as f/16, f/11, f/8.0 and f/5.6. As the number goes lower, more light is allowed through the lens.

With most modern cameras, setting the mode to ‘Aperture Priority‘ will allow you to change the aperture manually and have the camera automatically calculate the correct exposure. With low light photography you may find that your camera does not perform well. You may have to switch to full Manual Mode and adjust both the aperture and shutter speed yourself.

Advantages: you get more light entering your camera

Disadvantages: you’ll have very limited depth of field. You may be fine with this but take it in to account when composting and focusing.

Slow Down the Shutter

If you’re familiar with the settings on your camera and how they work, you’ll know that increasing the shutter setting by 1 f/stop will allow twice as much light to pass in to the camera.

Camera shutters uncover the light sensitive sensors inside a camera for short periods of time. The amount of light that passes in to the camera in 1/500th of a second is twice as much as passes in 1/1000th of a second.

Advantages: Just as with opening your shutter wide, this will let more light in.

How to Reduce Camera Shake

So you’ve slowed your shutter – and you run the risk of camera shake. How do you fix that?

The autofocus systems on most cameras do not fare well in low light conditions. You’ll almost certainly have to switch it off and twist the focusing ring yourself.

Okay. so they were the basic tips. Now to something to move on to once you’ve mastered the basics…

With a RAW image you have slightly more ‘dynamic range’. That is – your camera will store more of the detail it captures on the memory card. If you under-expose your image slightly you may be able to ‘rescue’ it later by using your RAW editor to bring out the shadow detail. You should not rely on this – it’s not good practice – but it may just help you gain an extra stop when you need it.

Get a FAST Lens

So we spoke above about opening up the aperture. Lenses have a maximum aperture. This is the aperture at which the lens cannot be opened up any further. Fast lenses have wider apertures than slower lenses. If you are to be taking photographs in low light on a regular basis, you need a lens designed for the job.

To make a lens faster the manufacturer has to use more glass. More glass means more polishing and good design. Faster lenses (of the same focal length) tend to be more expensive than slower lenses. But an f/1.4 lens will make so much difference in low light if you’re used to a f/4.8 lens.

Paying more for faster lenses is a given.

With digital cameras: the larger the image sensor the more sensitive it tends to be in low light. Check the specification – as this rule can be broken when manufactures (for marketing reasons) decide to increase the number of pixels they put on the sensor.

What we are talking here is full frame 35mm digital SLR cameras. They’ll cost more than cameras with smaller sensors but, so long as you choose wisely, they’ll be worth it for low light photography.

Now it’s time to put these techniques to your advantage. Why be frustrated by the problems of shooting in low light – when you can embrace the issue and allow the challenge to help you produce something stunning?

Okay, so this is a cheat. If you’re struggling in low light, one solution is to get more of it!

So holding your shutter open for any length of time is almost certainly going to result in some blurring. Anything that moves within the shot will blur. Use this creatively – moving taillights will draw transparent glowing lines across any nighttime shot involving moving vehicles.

I love the way that the cityscape has been made black and white in this shot leaving the vehicle light trails looking like a golden/red river flowing through the city.

You can use this trick in shopping malls: set your camera on a tripod, adjust your aperture such that your exposure will be 5 minutes or more (use ND filters if needed) and see how the mall appears almost totally empty at the end of the shot. Everyone who moves quickly through the shot will not recorded. The only people who will are those who linger in the frame.

Stars will form trails (if you hold the shutter open for long enough). You can take some very creative shots with this.