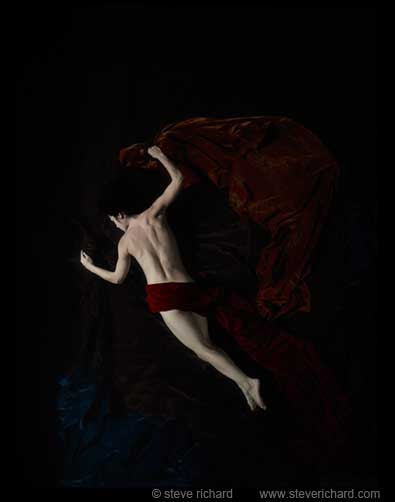 It is easy to see the parallels between ‘Scratching the Surface’ and ‘Cloud Busting’. The water has been replaced by some sort of dust bellowing clouds around the subject, modeling their movement. How many hundreds of shots did it take before the clouds took the forms imagined by Steve Richard? How many hours did the photographer and model spend waiting for the dust to settle (literally) before the next shot could be taken? 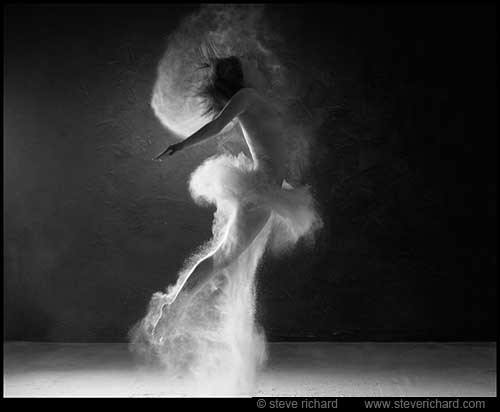 In his series ‘Veiled’ (update 2016-11-18: which doesn’t appear to be available on his website anymore by may be seen by searching Google) the water and the dust are replaced with the illusion of moving fabric, mimicking the flow of water.

Common themes throughout these series is the portrayal of movement not with blur (as is typically used by photographers to portray dynamism) but the effects of the movement on the environment in super-sharp detail.

In his series ‘The Sensual World’ Steve Richard returns to the use of water: this time creating fine art nude images by submerging the models beneath a custom built pool which allows fabrics and hair to adopt shapes impossible without the support of a liquid. Interestingly the presence of the water (usually revealed by most photographers from the ripples on the surface) is deliberately hidden from view leaving us with the understanding that there is something ‘wrong’ but not being sure what it is. Until the secret is realized (the model being submerged) it is hard to pinpoint exactly what is so intriguing about the images.